Builders plan to break ground soon on what will be the biggest development yet in the booming West Dallas area.

The $1 billion mixed-use project will include a lagoon water feature, thousands of homes, and retail and entertainment space on Singleton Boulevard west of downtown.

“We currently have plans for about 4,100 residential units, including multifamily and single-family homes and up to 900,000 square feet of retail and commercial,” said Megatel CEO Zach Ipour, who founded the homebuilding company with his brother Aaron. “In our mixed-use development, we will be proud to introduce the first-ever lagoon in the city of Dallas.

The lagoon water feature will be the centerpiece of the SoHo Square community, offering recreation including swimming, paddleboarding and kayaking.

“Our retail will include a first-class fitness center, a spa and yoga studio with several restaurants and an event center,” Ipour said.

He said the developers are wooing restaurant operators from New York and France to come to Dallas for the project.

The 50-acre development is planned next door to the builder’s existing SoHo Square townhouse community, which has more than 200 urban-style homes. Megatel started SoHo Square back in 2018, with townhomes in the project now priced starting at $434,000.

The new phase of SoHo Square featuring the lagoon will have more than 2,000 apartments in five separate complexes surrounding the lagoon.

“Phase one will have the lagoon and all the mixed-use development built first,” Ipour said. “Immediately after that, we will have our phase one multifamily building and build a public garage.”

The seven-story public parking garage will have more than 500 spaces.

Key to getting city leaders on board was Megatel’s agreement to include more than 300 units of workforce housing in the West Dallas development.

“The affordability was what really made the deal for the vast majority of the neighborhood residents,” said Dallas councilman Omar Narvaez, who backed the proposed project. “We have not ever approved a project without city incentives with a 15% affordability component.

“This is a victory not just for West Dallas but the workforce housing we desperately need,” Narvaez said. “What all of us are working toward is to get this affordability component into more of our housing.”

Narvaez said about a third of the workforce units Megatel will build will be priced for residents earning between 51% and 60% of the area’s median income.

“The affordable units are spread out, so they are not all in one building,” he said.

Megatel hasn’t requested any public incentives for the development.

Megatel’s project also gets community support because it will clean up an old industrial site. The property was once used for a waste disposal operation that handled portable toilets.

“It was dirty and nasty,” Narvaez said. “Now we are going to have crystal clear blue water and beaches and open green space.

“They are bringing an environmentally friendly concept and taking that industrial land.”

The SoHo Square site is between Singleton Boulevard and rail line.

The development will be near the popular Trinity Groves restaurant campus and the $400 million Trinity Green project, which includes apartment communities, single-family homes and a 1-acre centerpiece park.

“We are currently in the process of getting our permit to demolish the existing facility on the site,” Ipour said. “We are expecting that in 30 to 45 days we will have a groundbreaking.

“We are expecting by August or September we’ll have our plans submitted to the city for phase one. “

He said the lagoon will be completed within the next 12 months.

“Eighteen to 24 months from now, we will have our first multifamily projects finished and opened for residents,” Ipour said.

Megatel is still working on the pricing for the apartment units, which are still being designed.

“We’ve been working on the SoHo Square master-planned project since 2014,” Ipour said. “Since Day One, my brother Aaron and I have envisioned to create a resort-style amenity that fits into West Dallas.

“We were able to create a project that benefits everyone.” 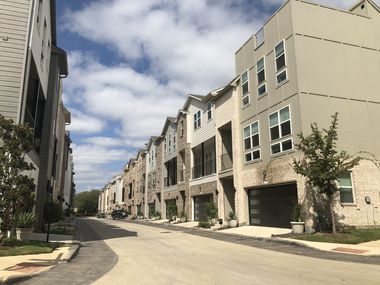 Read More: $1 billion West Dallas development will have thousands of homes and a lagoon

Is Utah’s housing market the hottest in the West?

Colorado native weighs in on the local real estate market

Stretching Their $700,000 Budget for a One-Bedroom in Lower…

Phoenix is No. 1 in nation for monthly rent growth

How the BoE & UK Government Stoke the Housing Fire

Mansion on Goochland golf course was most expensive home sale in…

How Utah is pioneering of a new kind of medical education

Cases surging, Himachal extends curfew till May 26 : The…

The U.S. Desperately Needs To Modernize Its Power Grid

What Will It Take To Make Biden’s Climate Plan Work?

‘People are sceptical’: why mining giant BHP wants to get to…